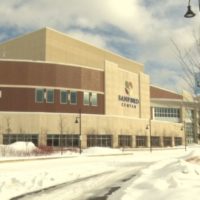 A year from now, Bemidji will have the chance to show the rest of the region what living in the true north is all about. A snow covered field on Bemidji’s South Shore will transform into the site for next year’s Hockey Day Minnesota. Last night, the Bemidji City Council heard from organizers on what needs to be done to pull off a successful event.

In less than a year from now, the site at Lake Bemidji’s South Shore will host thousands of hockey enthusiasts who will take in outdoor hockey games and enjoy a weekend’s worth of other entertainment.

Currently, the two plots of land that will be used for hockey day are up for sale, and organizers are looking for an agreement to the city not to sell or develop the land until after Bemidji’s Hockey Day.

The site will require some grading and utility work, but its location is expected to provide a great vantage point to showcase the lake and Bemidji’s many amenities during the 14-hour-long Hockey Day broadcast.

With games scheduled to be held both outside and in the Sanford Center, Bemidji’s Hockey Day committee says now the real work begins to get the city ready for the regional stage.

The official date for Bemidji’s Hockey Day will be announced in June once the NHL finalizes next year’s schedule.