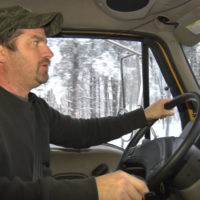 “It’s something different everyday, and plowing is actually kind of fun when you get some of the wet heavy snows like yesterday and today…it’s fun watching it come off the wing,” snow plow driver Jeff Warzecha said.

It’s never the same thing twice in a row for Warzecha, who is one of 16 plow drivers for Crow Wing County. Today, the crew headed out at 3 a.m.

“It’s a nice relaxing job, you get in here and watch the nature and hope you make it home safe,” Warzecha said.

After working 11 years for the county, Warzecha says he knows his routes pretty well and has down the system to get the best results.

“Priority ones, priority twos and then priority threes, and they are all based on traffic count,” Warzecha said.

Priority one roads are routes that have 5,000 cars travel per day; the county has a goal to get those cleared by six hours after a snow event stops.

“Getting the road opened up for the public and getting them from point A to point B in a [safe] manner,” Warzecha said.

No matter what type of weather Mother Nature throws his way, he says the most dangerous part of his job concerns the other cars out on the road.

“That’s probably one of our major hazards on the road is other people,” Warzecha said. “They just don’t give us room or slow down at all.”

It’s a lot to keep track of with the road in front of you and keeping a look out for those pesky mailboxes and garbage cans.

“I’m just kind of watching the curb line in my mirror, and I kind of just have to guess and feel it,” Warzecha said.

But even with long and often strange hours, Warzecha takes a lot of pride in his work and says he wouldn’t want to have it any other way.

“You see some pretty amazing pictures, so it’s a good feeling,” Warzecha said.

Although we hope that the snow will stop for the season soon, if it does continue, Warzecha will be out keeping the roads clear and safe.