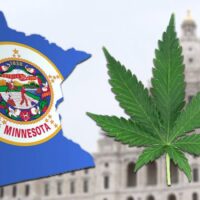 ST. PAUL, Minn. (AP) — Those enrolled in Minnesota’s medical marijuana program are expected to have a more affordable option to the liquid, oil and pills currently allowed under one of the nation’s most restrictive medical cannabis laws.

Democratic Gov. Tim Walz was expected to sign the bill that passed the House and Senate this week to relax the program by including smokable marijuana.

Patrick McClellan, of Bloomington, uses marijuana to treat his rare form of muscular dystrophy. McClellan said the smokable option is the most important change to the medical marijuana program since it was passed in 2014. The cost of liquid cannabis has been a barrier, he said.

“What we ended up with is basically a designer drug for the rich. This was only for people that could afford it,” McClellan said. “Most people like me, who are on disability, were forced then to purchase some from the manufacturers and then products that have been smuggled in from other states that we purchase on the street.”

Expanding the medical marijuana program to include a smokable option is expected to reduce the cost for patients and improve accessibility, Minnesota Public Radio News reported.

Republican Sen. Michelle Benson, the chairwoman of the Senate health and human services committee, said the change is about helping patients.

“It is not our goal to make this a path to legalization,” she said during a Senate debate Monday. “It’s a goal to make this available to people with a medical need who cannot afford it. So, we hope we’ve reached the right balance.”

The new medical cannabis law would be scheduled to take effect by March 1, 2022, or once a procedure is in place for testing raw marijuana from the state’s existing manufacturers.

Another program participant, Maren Schroeder, of Stewartville, said she has paid up to $250 a month for medical cannabis and is also looking forward to a smokable option.

“It will help me have a legal route to get it in plant form, and that means safety,” Schroeder said. “That means everything I’m consuming has been lab tested and isn’t contaminated with mold or mildew or pesticide or herbicide or anything like that. So, I’m really excited about it.”

Democratic House Majority Leader Ryan Winkler, of Golden Valley, said costs to patients could fall to around one-third the cost of the oils and pills now available in Minnesota.