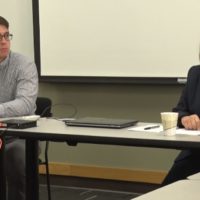 Senator Tina Smith’s staff was in town today to discuss the farm bill that’s currently making its way up the chain in Washington D.C.

Tomorrow morning, Senator Tina Smith and the rest of the agriculture committee will have a mark-up of the bill. The Farm Bill is bipartisan with 12 different sections or titles. They include commodity programs, conservation, trade, credit, rural development, research, energy, horticulture, crop insurance and a miscellaneous category. There are few the senator will be specifically focusing on in D.C.

“She was able to advocate for rural development, broadband, dairy, sugar, livestock, she kept the nutrition program in, conservation, and she made sure that there was an increase,” says Paula Sunde, outreach director for Senator Smith.

Tina Smith’s staff has held several of listening sessions all over the state to figure out what exactly is most important for Minnesotans. Around our viewing area, forestry and livestock conservation have been big concerns.

“We focus a lot earlier on the southern part of the planting season. It depends where you go. Nutrition tends to be brought up. Conservation is a big one and commodity and crop insurance – keeping crop insurance as it,” says Sunde.

Once the bill gets out of the Senate, it’ll come to the floor, which the agriculture committee is hoping will be done by the July 4th recess. The House will also have to pass their own bill. Once both of the bills pass they’ll go to conference who will decide what goes into the final bill. Then, it will be sent to the president for his signature. Patience is required because the whole process could take a few months.