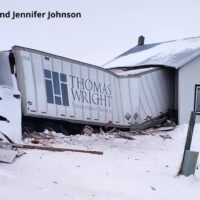 A town hall building in Shooks Township in northern Minnesota, about 40 miles north of Bemidji, was severely damaged after a semi-truck crashed into it Tuesday evening.

A semi was headed southbound on Highway 72 when it failed to stop at the Highway 1 intersection, left the roadway, and went through the Shooks Town Hall. The driver, Russell Jolly of Winnipeg, suffered non-life threatening injuries in the crash. Fortunately, there was no one in the town hall building at the time of the crash.

Eric and Jennifer Johnson of Hooked on Shooks Bait Shop were at their business when they heard the crash and ran down a couple of blocks away to see if anyone was hurt. Eric tells Lakeland News when he arrived at the scene, Jolly was unconscious but came to and immediately began asking if anyone was hurt inside the building.

The crash happened around 5:45 Tuesday evening. The road had snow and ice on it at the time of the crash. The State Patrol says alcohol was not involved, and Jolly was wearing his seatbelt.

Thanks to Eric and Jennifer Johnson for sending Lakeland News photos of the incident. 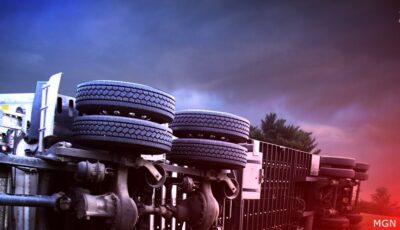