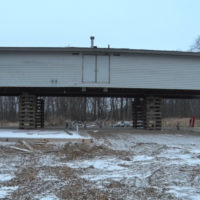 Sex trafficking is an issue that many people might not think happens in our area. A non-profit based out of Park Rapids is working to educate the community and build a home in the Brainerd Lakes Area for girls who have been trafficked.

“We are in the business of building homes for girls who have been sex trafficked. We’re also about awareness and spreading information around to help people understand what sex trafficking and human trafficking is,” explained Jessica Burkhamer, Rising Hope Foundation Board President.

The Foundation was founded in 2013 by Dave and Vicki Leckie after witnessing the magnitude of sex trafficking while working in the trucking industry.

“They took a stand and created the foundation and got the nonprofit status going,” added Burkhamer.

“A huge amount of money was donated and it needed to be in Crow Wing County, and so we were able to purchase the property,” said Lapka.

That is what brought the organization to Brainerd, the future home of the first Freedom Ranch.

“We’re close to being done. We still need some funding and not only funding, but we need people’s help in building it,” said Burkhamer.

The house will provide eight beds, schooling, therapy, and a safe space for victims.

“It’s knowing that we have places for these girls to go. These girls are being treated as human beings and given a chance at life. It’s hope, because this is not going to be the first one. We are going to continue to build,” Burkhamer said.

Come spring when the first Freedom Ranch is set to be finished, there will be a safe place in Crow Wing County for girls to have a second chance.

“We have to make a difference in eight girls’ lives, but also let people know that we’re not going to allow this to happen,” said Lapka.

“It’s everybody coming together to understand what needs to take place to have these people, they’re people, human beings. That they were once babies like everybody else and what happened,” added Burkhamer. “They need a chance to live.”

The Freedom Ranch will be located southeast of Brainerd. In the future, the foundation hopes to build two more Freedom Ranches with locations in Bemidji and Park Rapids.