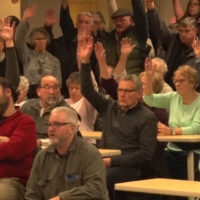 The Beltrami County Board’s vote on an executive order on local involvement in refugee resettlement has raised some eyebrows. Beltrami County is now the second county in the nation to vote down on President Donald Trump’s executive order. If local government takes no action by the deadline, refugees may not be placed in that county.

“So, I think the motion is going to carry, and I guess we will be making history today,” Beltrami County Board Commissioner Reed Olson said.

His remarks were met by cheers and applause last night as he told a large crowd of people that Beltrami would be the first county to turn down refugees in the state of Minnesota. The executive order failed by a 3-2 vote. Olson was one of two commissioners who voted for the refugee resettlement along with Tim Sumner. Over 100 people crammed into the Beltrami County Board room to show their frustration that the vote would be made without a public hearing.

“That’s why there was the turnout there was tonight. People that just randomly showed up. It just proves what Beltrami County stands for the majority. There’s obviously people that are for it, that’s their beliefs, and that’s fine, they’re entitled to it,” said attendee Jim Latzke.

The discussion whether or not to allow a refugee resettlement into the county came after an executive order issued by President Donald Trump in September. The order requires a written letter from states and local governments to notify the State Department of their decision.

“When settlements happen, they look at where there are existing communities, so the chances of anyone coming to Bemidji are very slim and it surely wouldn’t be hundreds, it would probably be four,” Olson said.

Local officials say the county just doesn’t have the funding to bring in refugees, with Beltrami County being the poorest county in the state.

“I really care for the folks in my county and I need to take them first, and I’m going to make sure that we stay above water and take care of the folks we have. We have a lot of folks in our county that need our help,” said Beltrami County Commissioner Jim Lucachick.

After the vote, Democratic House Majority Leader Ryan Winkler took to Twitter to voice his opinion on the county’s decision. In a phone interview, he tells Lakeland News that no one is seeking refuge in Beltrami County and that the county is seeking financial support from other counties in the state, while simultaneously voting to say that outsiders are not welcome.

“Nobody is applying for refuge, housing or living in Beltrami County, there’s no funding request, and Beltrami County already receives a lot of funding from tax payers around Minnesota who include refugee and immigrants,” explained Winkler. “So, they can’t both say they want help from those people and say they are not willing to participate in addressing their needs should they ever arise.”

Winkler’s tweets echoed across the state, and area legislators were quick to reply. Representative Matt Grossell says the comments made by the DFL House leader is an example of big government trying to tell local government what to do.

“We all talk about wanting grassroots government to do their thing, to be able to function and to have their voices heard. And to sound off in a threatening way as to say, you know, ‘you didn’t vote the way I wanted to, so, I just may work on withholding funds from you,’ that’s not the way to do it. We’re state legislators, we are public servants,” Grossell said.