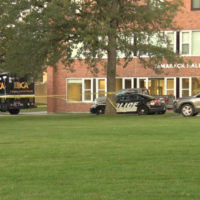 A man is dead after a fall from the Tamarack Hall Dorms at Bemidji State University. The circumstances surrounding the death are still unclear, but police say an investigation is ongoing and their primary goal right now is retracing the victim’s final moments.

“This is an investigation that’s ongoing. There could be some criminal aspects of this at some point, but we’re trying to figure out where that may, if it does in fact, lie,” says Captain David LaZella, with the Bemidji Police Department.

The incident happened early Sunday morning at 12:30. Police were called to Bemidji State University’s Tamarack Hall after reports that a man was lying on the ground bleeding. Police tried to perform life saving efforts at the scene but were unsuccessful.

“We do have some evidence that shows us that he fell from a relatively high source, and right now we’re just trying to figure out, put those pieces together to retrace his last steps,” says LaZella.

Police say the man was not a student at the university. Today, BSU made counselors available to staff and students. The university also has plans to create a healing event in response to the tragedy.

Many students say they heard about the incident through an email from Dr. Hensrud on Sunday morning. For the students who live in Tamarack, waking up to police lights outside of their dorms was tough.

“We were on a soft lockdown, I believe. Everyone had to stay in their dorms and stuff so it was pretty scary around here, and on my floor there was girls out, you know, out in the area just crying,” says BSU student Viviana Viloria.

Another BSU student, Gabriel Kitzmann, says, “I think everyone’s kind of down from kind of what I’ve observed. I think people are still kind of talking about it and there’s a lot of, kind of, rumor and speculation still going around because no one really knows what absolutely happened yet.”

BSU says they have plans to hire a 3rd full time counselor to help students deal with the impact of the event. The family of the victim has been notified, although his name is being withheld pending further investigation.