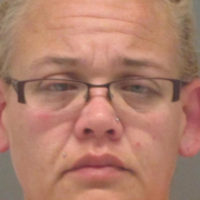 Grant’s boyfriend accused her of assault and threatening to shoot him with a gun. The felony counts she’s charged with are for possession of a firearm, second degree assault with a dangerous weapon and theft. She has also been charged with gross misdemeanor domestic assault.

Her boyfriend, who is unidentified, reported to the Hubbard County Sheriff’s Office to report Grant.

According to the Pioneer Journal, “The man said at approximately 1 p.m. on Sept. 13 he was riding in a vehicle driven by Grant. They drove about one mile west of Park Rapids and stopped on a gravel road. He alleges Grant then pulled out a semi-automatic pistol and struck him across the forehead and nose with the pistol. Grant then pointed the gun at the man. He grabbed the gun and turned it away from him and the gun went off and shot a bullet through the windshield, according to the complaint. The victim set the pistol down on the floorboard, got out and ran towards a stand of trees when he heard two shots. He looked back toward the vehicle and saw Grant standing there. He ran into the woods and hid from Grant, who got into the vehicle and drove away.”

The victim told Sgt Dan Kruchowski that he feared for his life and appeared to have a cut on his forehead and nose as well as on his wrist.

Again according to the Pioneer Journal, “The felony possession of a firearm charge is punishable by up to 15 years in prison and $30,000 fine, if convicted. Grant faces up to seven years in prison and $14,000 fine for the second degree assault with a dangerous weapon charge.”