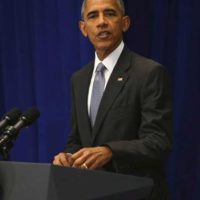 In Chicago U.S. President Barak Obama praised the off-duty officer who acted during a stabbing at the Crosswoods Center Mall in St. Cloud and shot dead the attacker.

During the weekend a man, for which the radical group Islamic State has now claimed responsible, attacked and stabbed eight people before being shot and killed by the officer.

“Thanks to the quick action of a brave off-duty police officer, the suspect was killed and we avoided more people being hurt,” Obama said of the officer, who works for the police department in nearby Avon, Minnesota.

According to the Brainerd Dispatch, “…Obama, in New York City for the United Nations General Assembly, told reporters that the Federal Bureau of Investigation was treating the mall attack as a “potential act of terrorism.”

The mall has reopened today with extreme security measures.