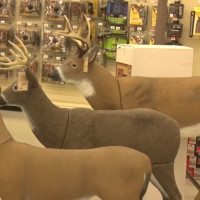 Hunters in many areas should expect to see more deer while afield this year. As a result of a conservative 2014 hunting season, and a fairly mild winter, the Minnesota Department of Natural Resources expects the deer population to grow. Although 2015 remains as another conservative year, the DNR knows that the current limitations will only benefit the rebuilding process.
Part of the 2006 Goal setting process of the Minnesota Department of Natural resources was that the deer population was too dense.

But now their efforts have gone beyond their goal reducing deer numbers too far.

The way to build large deer populations is to restrict the amount of deer that can be harvested. But for some that hasn’t strayed them away from the challenge of the hunt.

85 percent of the 40 of the128 deer permitted areas located in the northeastern,north central, and east central Minnesota, are being managed for higher populations. The goals set for these areas could range from stabilizing the location to and increase of population by 50 percent.