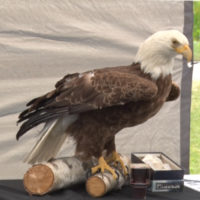 In Bemidji, they’re not only celebrating National Eagle Day, but also honoring local heroes who’ve helped bring back the bald eagle from near extinction. Recently, mayor Rita Albrecht declared June 22 as Eagle John Mathisen Day in Bemidji. Chris Tolman, the Director of Nature Connection, says they’re honoring Mathisen for the work that he did for the community.

“He was one of the folks that was very instrumental in establishing the policy and procedures in protecting eagle nests and determining what needed to be done to help bring back their population to a healthier level than what it was at that time,” Tolman said.

Mathisen was a wildlife biologist for the Chippewa National Forest for 25 years. During his time as wildlife biologist, he was part of the recovery team. Mathisen says at the time, the first step was to determine how many eagles were available in the area.

“The first time we did an inventory, we had 35 pairs that we knew about and that was remarkable,” Mathisen said. “Everybody couldn’t believe it there were that many.”

The event had activities set up along Paul Bunyan Park. There was a raffle, a kid’s craft tent and a photo booth opportunity to take a picture with a turkey vulture and a red-tailed hawk. Tolman says the event was a collaborative effort that was made possible by everyone involved.

Bemidji has numerous activities going on around the city, and at Lake Bemidji State Park, kids are building an eagle’s nest.

“Here we kind of have our larger limbs, that’s kind of like the top of our tree, and we also have some smaller sticks that we brought over,” Lake Bemidji State Park Naturalist Christa Drake said. “So basically they’re going to have to weave the sticks through these tree branches and build it to at least six feet wide.”

Kids learned about the bald eagle, colored their own eagle cut-out and listened to a story.