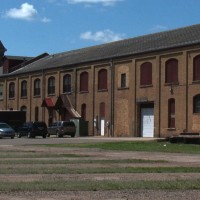 A new train has arrived in the nearly 150-year-old Northern Pacific train depot in Brainerd. During the second day of Brainerd History Week Northern Pacific held tours of their old facility to show off what changes they’ve made and what their future will look like.
Dave Hutton, Northern Pacific Inc. vice president, says, “Being it’s history week this week and railroad day today, it was important for everyone who was interested in railroad history to have a tour. And just to show what we have done with the facilities in the last 22 years that we’ve own the property.”
Hutton says, in the 1870s the Northern Pacific Railroad was building across Minnesota. And when they came to the Mississippi River they decided they needed to build a depot along with a bridge to cross the river. Hutton says the railroad is why Brainerd exists.
Hutton says, “It was the major employer of the town and a lot of people who are here today, either they worked here or their father worked here. So that’s quite a few people on the tour that have a connection to the facility here.”
Shelly Thelen, who’s family has been in Brainerd since 1883 and has had family who at the depot, says, “With being here for 131 years, that’s a lot of family in the area. And it was at that time when I started to have more and more pride of being a native of Brainerd. I mean how many people can say that. They’ve been in a town for that long.”
One company is using the space from the nearly century and a half year old train depot to showcase the best of Brainerd, old and new.
Aimee Jobe, owner of M.P. Event Space, says, “For the same cost we could have built a brand new building, a brand new venue. And it just doesn’t have that feel. It’s just a feeling of coming in here and knowing that a hundred years ago there was people building Brainerd on this.”
Hutton says, “This event space, we decided this was the right size for wedding receptions and other kinds of events, so it’s a new kind of venture for us.”
Northern Pacific is looking to the future to continue building Brainerd for generations to come. But instead of laying tracks they’re looking for companies to expand into their buildings.