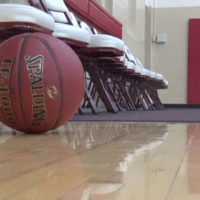 The most exciting basketball players from the region soared into Bemidji, Sunday for the eleventh annual North Central All-Star Event.

The athletes lived up to the hype as they threw down in the slam dunk contest. The boys tallied up the judges’ points totals from two dunks.

The athletes showed off their sniping skills in the three-point contest. Oswald refused to settle for less than first, draining 17 triples in one minute.

The girls also displayed their downtown dexterity. Little Falls junior Jordan Schuett let everyone know she can “Schuett” the lights out. Her 14 threes won the girls’ competition.

The All Stars divided into teams based on their positions and played two games against the best players in the area.

Area coaches nominated all-stars from their teams, and sixty athletes made the final cut. Bemidji’s lone representative, Josh Cervenka felt right at home because he was.