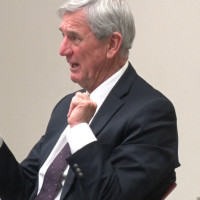 Nolan Gets Hearing On Bill To Push Through PolyMet Land Swap

Clayton Castle — Jul. 10 2017
MINNEAPOLIS (AP) — U.S. Rep. Rick Nolan gets a hearing this week on his bill to push through a land exchange needed for the proposed PolyMet copper-nickel mine in northeastern Minnesota.

It’s one of four land exchange bills the House Subcommittee on federal lands will consider Friday in Washington.

PolyMet wants to swap 6,650 acres of federal land it needs in the Superior National Forest in return for a similar amount of private land that would be added to the national forest. The Forest Service has agreed.

But environmental groups have filed four separate lawsuits against the exchange. They say the deal undervalues the federal land and violates other laws. PolyMet disputes those assertions.

Nolan, a Democrat who represents northeastern Minnesota, is seeking to ensure that the transaction gets completed despite the lawsuits.

EPA Recommends Against Reissuing Permit for PolyMet Mine

Wildlife Groups Sue Agencies Over Assessment on PolyMet Mine