Rescue efforts are continuing this week in Red Lake in the hopes of finding two missing boaters.

It’s been more than a week since one man, identified as 29-year-old Deland Beaulieu, and a 17-year-old male juvenile were reported missing after their boat capsized near the Cut-Off on Lower Red Lake.

Today, crews that included family members of the missing were split into teams. They searched from 6:30 this morning until they lost daylight.

“Based on the coordinates and locations that they’ve been working with on the search this past week, we use that for our reference guide and we deployed the submersible vehicles in the water to do grid searches,” says Thomas Inocencio, a sergeant with the Grand Forks Sheriff Department aiding in the rescue efforts.

The location of the capsized boat is no longer visible, although teams were able to locate its position thanks to sonars and underwater cameras.

Today’s search was closed off to the public and the media due to safety reasons. Inocencio says, “Because of the conditions, all the operations are air boat based. The ice is not safe for us to be on, it’s not safe for anybody to be on, so the only safe way for us to approach that search is by air boat.”

Ice has played a factor in this story in more ways than one. Police say it’s now believed the shifting ice may have been what pushed the boat under water. Today that slush posed even more challenges.

“With the ice shelf, we’ve had a lot of shifting in the ice this past week from when it was first discovered where the boat was located. So, that’s one of our obstacles that we’re working with right now is the movement in the ice over the past week isn’t in the same condition,” says Inocencio.

Authorities say that although the public has been very helpful, at this point there’s not else much they can do.

“The public was able to contribute when we had open water because then you have people who can put boats into the water. Right now I think it would pose more danger in a dangerous situation to have the public participate in any search efforts right now,” says Inocencio.

Tomorrow, the plan is to pick up where they left off. For final words, authorities are warning the community to stay away.

“Just to stay off of the lake until it’s frozen. Until that ice is at a safe depth,” warns Inocencio.

The Grand Forks team is scheduled to be in Red Lake until tomorrow. There is a possibility the search may be postponed if weather conditions worsen. 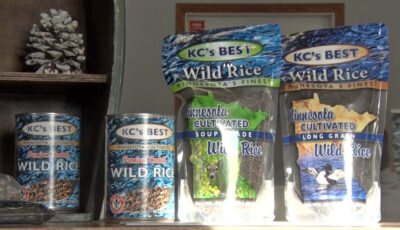 In Business: A Closer Look at KC’s Best Wild Rice of Bemidji