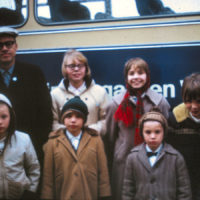 “Most people around here knew my dad, and they did not know this story,” says Kris Wavrin.

Wavrin’s father is Reverend Paul Griebel, who lived in Bemidji until his death in 1992. But before that, he and his family spent time in Nigeria. Griebel worked there as a Christian missionary in the ’60s. He helped save lives when a war arose in the country.

“At our boarding house, we had a lot of people working for us who were Igbo, and so that’s why he wanted to shelter them, and just in a tiny little linen closet he sheltered, I don’t know, 20 people or something like that,” says Wavrin.

Wavrin says the work her father and her mother Margaret left an impact on her whole family, as well as the lives they touched in Nigeria.

“I think almost all of them got to safety. There was only maybe one or two. And then after the war, one of them even came back and worked for us again. His name was Ruben,” Wavrin says with a laugh.

Rev. Griebel’s story is now being shared in a film called “The Disturbances.” The filmmakers conducted interviews with people from all over the country to make sure that the story of the Christian missionaries was told.

“Especially when we lived in Nigeria, whenever he could help somebody, either monetarily or just by helping them in some way, he would do it,” says Wavrin, speaking about her father.

There will be a screening of “The Disturbances” on April 8th at Trinity Lutheran Church in Bemidji. It starts at 10:30 in the morning. The screening will be followed by a question and answer session at the church the following week.