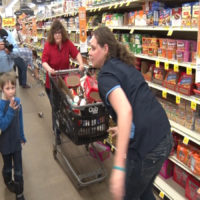 Businesses in Baxter were ripping through the aisles of Cub Foods this evening, trying to grab as much food as possible for a great cause.

“We raised $3,111 today, and we did that in less than five minutes,” Doyle Jelsing, Neighborhood National Bank’s President, said.

A supermarket sweep for a good cause – that’s the best way to describe Neighborhood National Bank’s annual Grocery Grab event. Four teams of two each had 90 seconds to grab as many groceries as they could, and all of the food goes to support the area food shelves. The team that grabbed the groceries worth the most money had their items paid for by the Neighborhood National Bank.

“The winning team, we pick up the grocery tab, and they get the trophy,” Jelsing said. “The other teams pay for the groceries they brought in their cart.”

Teams of two came racing down the aisles at Cub Foods looking for anything and everything to put into their cart, while other teams had a strategy of what items they wanted to shop for.

“Two aisles is basically all we stuck to,” Carson Berczyk, a Jack Pine Brewery Employee, said. “We were thinking bulk, just go for the boxes, and that’s what worked.”

The team from Jack Pine Brewery focused on tuna as their main item and they won the competition bringing in over $1,100 worth of food.

“I’ve always kind of wanted to do something like this,” Jake Bakkila, a Jack Pine Brewery Employee, said. “It’s for charity, and it’s a good thing to go do for work, and I thought it was a blast – it was definitely well worth it.”

This is the perfect time for the grocery grab event as March is Minnesota’s Food Share Month.

“Up until Christmas there is kind of a mentality of giving, and then that falls off, and [the food banks] are always short,” Jelsing said. “Summer and spring haven’t picked up yet, so the shelves become depleted.”

The food shelves in Crow Wing County should be in a much better spot after over $3,000 worth of food was donated from the Grocery Grab event.

“Personally, it’s very gratifying, and I believe our staff get particularly excited,” Jelsing said. “It generates its own excitement, and then after everyone sees the totals, everyone just sits back and smiles and says, ‘that’s a good thing.’”