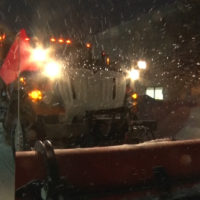 When most people are still in bed, the Minnesota Department of Transportation snowplow drivers are starting their day, getting the roads ready for early morning commuters.

Every day is different for a snowplow driver. Sometimes you deal with rain, ice, wind or even a combination of elements. This morning’s storm proved difficult because the snow wouldn’t stop coming.

“I don’t know if it’s the most difficult, but the most frustrating is when it just keeps snowing and snowing, it seems like you can’t get ahead of it. Then you’re just plowing and plowing and it seems like it just never ends and you can never catch up,” says Gonzales.

The snowplowers work in two different, one group in the early morning and then another group in the afternoon so that way, the roads are constantly getting plowed for drivers. What some people may not know is that it takes some multitasking skills to be a snowplow driver. You have to look for everyone from other cars on the road to the mailboxes on the sides of the streets.

Gonzales says, “There’s a lot of hazards. I mean, number one is the traffic. You’ve got to watch out for them because they’ll pull up right behind you if you’re backing up to clean a crossover or intersection. You’ve got to make sure you don’t go too far to the edge or you’ll go in the ditch.”

At all different times of the day, there are around 8 to 12 snowplow drivers on the road just in the Bemidji area alone. That means you’re bound to see one. Drivers should remember to be patient and stay alert.

“If we’re plowing and there’s a snow cloud behind us, we try to slow down so that they can get by us like on the four lane, or sometimes we pull up on the shoulder so they can go by because a lot of people will try to pass you, and that’s when accidents happen because we won’t see them until they’re right next to us,” says Gonzales.

You can check out other pictures and videos from the MnDOT snowplows here.