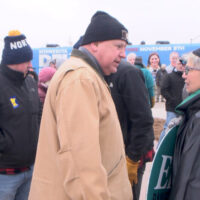 Despite the freezing winds and falling snow, around 100 people came out on Sunday, November 6 to the Minnesota Democratic-Farmer-Labor (DFL) Party’s “Get Out the Vote” bus tour that stopped in Bemidji.

Emphasizing the party’s main message of “One Minnesota” during the tour, major state candidates such as Governor Tim Walz and Lt. Governor Peggy Flanagan made appearances to encourage everyone to go to the polls and vote this Tuesday.

The only major candidate to not appear on this stop was Keith Ellison, the incumbent and current Attorney General for Minnesota. Ellison was not able to attend due to a prior commitment.

Traveling from the Twin Cities to Greater Minnesota, the DFL candidates encouraged participation in democracy. Topping voter turnout in the country the past three elections, Minnesota’s historic voter participation is one point current Secretary of State and incumbent Steve Simon talked about during his time on stage.

The DFL candidates spoke about the other key factors that they believed would play a part in the midterm results. These key factors include access to reproductive health care, fully funding public education, and election integrity.

With just over 24 hours until the polls close in Minnesota, the races for Governor and other state offices are being closely observed by both sides. In the traditionally blue state that is now turning purple, the question remains if there will be a change in leadership this Tuesday.