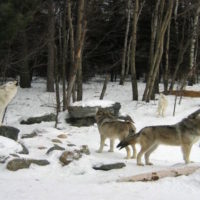 An estimate shows a slight increase in the population of wolves in Minnesota.

According to the Department of Natural Resource, the annual survey moved upward to 2,278 wolves. That’s about 50 more than last year’s estimate.

But the animal went on the federal threatened list in 2014, and no hunt was held last winter. That makes this the first survey since hunts were suspended.