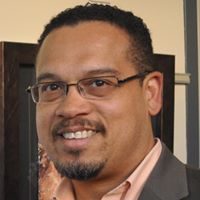 MINNEAPOLIS (AP) — Minnesota Democratic officials asked Minneapolis police on Wednesday to investigate allegations of domestic abuse against Rep. Keith Ellison, after an attorney with links to the party found that the woman’s claims were unsubstantiated.

An ex-girlfriend of Ellison, Karen Monahan, alleged in August that the Democratic congressman dragged her off a bed by her feet while screaming obscenities at her in 2016.

A draft report of an investigation requested by the Democratic-Farmer-Labor Party found that Monahan’s claims were unsubstantiated . Since the report was leaked Monday, the DFL has said it wanted law enforcement to conduct an objective investigation.

Minneapolis City Attorney Susan Segal asked Dakota County Attorney James Backstrom to review the case, citing a conflict of interest because Ellison’s son is on the City Council. But Backstrom said Tuesday he’d review it only if police investigated first .

The DFL forwarded the initial review to police Wednesday.

Ellison, a deputy chairman of the Democratic National Committee who is now running for Minnesota attorney general, has denied the allegation. His attorney, Carla Kjellberg, said in a statement Tuesday that law enforcement has no jurisdiction because Monahan never made a police report.

Monahan’s attorney, Andrew Parker, has said Monahan would cooperate with any investigation.

Ellison was first elected to his Minneapolis congressional district in 2006 and emerged as a leader among liberal Democrats, including co-chairing the Congressional Progressive Caucus. He and Monahan dated for several years but broke up before she accused him of physical abuse.