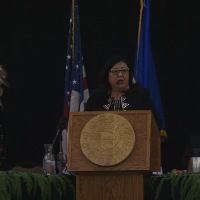 Mille Lacs Band of the Ojibwe Chief Executive Melanie Benjamin called for self-governance while delivering the 33rd annual State of the Band address today. According to a press release, the chief highlighted the history and value of the Band’s division of powers within the tribe government.

Benjamin shared the story of how Doug Sam, Art Gahbow and other Elders worked to create a division-of-powers system of government that would function in a way that was inspired by the Anishinabe Ceremonial Drum. In the new division-of-power government, similar to the Ceremonial Drum, everyone had an important role and respected the roles of others.

“Everyone has certain duties, but no single person is more important than another,” said Benjamin in her speech. “When everyone knows their role, when they carry it out with the utmost respect, when they follow their oath, the Manidoog are happy and the People are helped.”

More than 1,000 members, friends and neighbors attended the event held at Grand Casino Mille Lacs in Onamia. Benjamin called on Band members to engage more with their government as Elders intended.

“Band Members are not supposed to be separate from government, waiting to be served. We are to be self-sufficient, involved and in service to the community and one another. This is how our elders wanted us to use government to better our lives,” said Benjamin.

Benjamin also highlighted the many successes that the Mille Lacs Band and its members achieved in 2016. Among those successes were:

Benjamin dedicated her address to the late Band Elder and the first Speaker of the Band Assembly, Doug Sam, and the other Band leaders and elders from his generation who established the current division-of-powers government in the 1980s.