People across the country today mourned and remembered the lives lost during the September 11th, 2001 terrorist attacks. Faculty in the Brainerd School District wanted to honor the day, even though their students were not alive when the attacks took place.

Almost everyone can remember exactly where they were when the planes hit the twin towers on September 11th, 2001.

“18 years ago this morning, I was walking through our library here at Baxter school and the television was on and I saw the footage of the planes hitting the towers,” said Bob Johnson, a fourth grade teacher at Baxter Elementary.

For some, who were not alive at the time, they only know the details of that day through stories.

“We grew up watching videos of what happened on that day to people that were alive, was not born,” said sophomore at Brainerd High School Emerson Holcomb-Smith. “It’s such a monumental day.”

Teachers in the Brainerd School District felt it was important to honor the day and teach kids the lasting impact that that fateful day has had, even if they don’t remember it.

At the high school in the American Sign Language classroom, the instructor took the day to refresh students’ knowledge of the national anthem.

“We signed the national anthem in remembrance of this day and to remember all the lives that were lost during that day,” said sophomore Melissa Bachman.

“It’s just a nice coincidence because we need practice for it and it’s something that can show that we still remember,” junior Elijah Rock added.

Though September 11th, 2001 was already 18 years ago, the memory and impact of that day will never be forgotten.

“It was a changing point in our country. Nothing has been the same since then and it’s important that the kids realize what happened, why it happened, and that so many people gave their lives that day not only in the attacks but in the aftermath,” Johnson said. “And they continue to do so.”

Memorial services were held across the country today. President Donald Trump attended a memorial at the Pentagon, where 184 people were killed on this day 18 years ago. 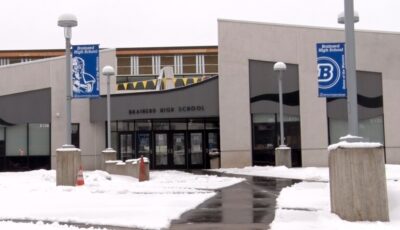