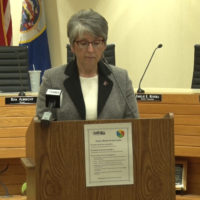 The city of Bemidji is doing well according to Mayor Rita Albrecht. The city is seeing tremendous growth, which can lead to good things.

Albrecht says, “The growth of the city has been really substantial. City council and staff are working together to meet the challenges of our growing community, and our population is currently around 16,000. We are growing at more than 5 percent annually.”

Of course, with new growth come new challenges. The mayor mentioned that turnover with a few jobs is a problem, and that the city also needs to fill a few extra positions in areas. There are also a few infrastructure issues as a result of the growth.

“There are a lot of things that we need to consider when meeting the challenges of tremendous growth. We have well contamination in a new well, a wastewater treatment facility I mentioned. Public engagement – we need to do more communication and engagement with our community,” says Albrecht.

The mayor reports that the city’s crime rate has dropped 15 percent from the previous year and also that the city is soling crimes at a rate of 72 percent, which is higher than average, although drug- and alcohol-related crimes still remain an issue.

During the state of the city, the mayor also highlighted our three biggest community assets.

“Three community assets that add to the success of Bemidji and are really indicative of our growth are our new liquor store, the Carnegie Library renovation and the Sanford Center,” says Albrecht.

The new liquor store provides additional funds for various projects, while the Carnegie Library has been recognized as a historic landmark and has a received a few grants. While the mayor says the Sanford Center adds 19 million dollars to the economy, she also acknowledged that property owners are footing some of the bill for operations and upkeep of the property. There are plans to address that with a new committee and public input.

“We’ve put together a committee of community members to flesh out the idea of expanding the pie through a tax on food, beverage and lodging or some combination of those. We want citizen participation in this discussion and we’ll have opportunities for you to learn more about our ideas and for an equitable funding strategy, and I’m counting on everyone’s input for that process,” says Albrecht.

The mayor ended her address by highlight some potential future projects, including the new veterans home, a renovation to the federal building and a new heart center for Sanford Health.