According to a post on the Red Lake Police Departments Facebook page, Red Lake Conservation Officers have been monitoring ice thickness on Lower and Upper Red Lake and have now determined the lakes can be fished.

The point from McKenzie’s to Battle River contains about 8 inches of ice, and the south shore contains the same depth up to the location of the ice heave. The ice near Ponemah was also reported to be about 8 inches thick as well.

However, fishermen are reminded that the ice thickness will not be consistent everywhere on the lakes and extreme caution should be used for a few weeks before using other modes of transportation such as ATV’s and large vehicles. In addition, strong winds can also shift ice if the lake still contains areas of open water near inlets and outlets.

Red Lake authorities said to use the recommended ice thickness guide as determined by the Minnesota Department of Natural Resources as stated below.

Non-Red Lake Band members can only legally fish on a portion of Upper Red Lake. 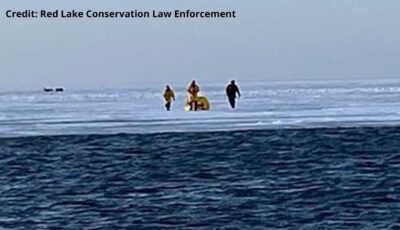