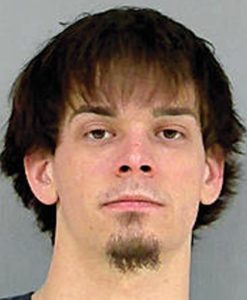 On Wednesday, June 6th in Morrison County District Court, Jerad Michael Whitford plead guilty as charged to a single count of Murder in the Third Degree. Whitford, 25, admitted to Judge Douglas P. Anderson that on June 14, 2016, he had arranged to purchase heroin that ultimately resulted in the overdose death of Travis Scherping of Little Falls.

The court previously dismissed the Third Degree Murder charge back on August 23, 2017, but the Morrison County Attorney’s Office appealed the order of dismissal to the Minnesota Court of Appeals. On February 20, 2018, the Court of Appeals reversed the dismissal, and the charge was reinstated.

Whitford was in pursuit of a plea deal with the Morrison County Attorney’s Office, and promised to cooperate with investigators. He also promised to testify in the jury trial of co-defendant Jason White.

White’s first trial ended with a hung jury in February. The agreement calls for a 60 month prison sentence. Whitford will not be sentenced until after White’s trial.

Jason White’s new trial date will be set following Judge Anderson’s rulings on several pretrial motions. Those rulings are expected in the next thirty days.

Co-defendant Callie Statema also plead guilty to Third Degree Murder and is due to be sentenced by Judge Anderson on June 8th. Statema provided $450 to Whitford for purchase of the heroin. Whitford then delivered the heroin to Statema who, in turn, provided the heroin to Scherping.

Morrison County Attorney Brian Middendorf stated, “As a result of Whitford’s guilty plea, we are taking yet another step forward towards justice in this tragic overdose case.”

Lois Riess, Extradited Back to MN, Pleads Not Guilty in Husband's Death

Sanford Health Predicts Spike of COVID-19 Cases in the Fall