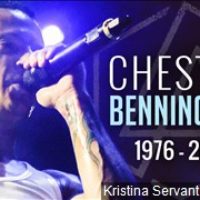 The rock band said Monday that the “shock waves of grief and denial are still sweeping through our family as we come to grips with what has happened.”

Bennington, who was 41, hanged himself from a bedroom door in his home near Los Angeles. The band started the statement with, “Dear Chester.”

“You touched so many lives, maybe even more than you realized. In the past few days, we’ve seen an outpouring of love and support, both public and private, from around the world. Talinda and the family appreciate it, and want the world to know that you were the best husband, son, and father; the family will never be whole without you,” the statement said.

Bennington was one of two lead vocalists for Linkin Park, which became one of the most commercially successful acts of the 2000s. They won countless awards, including Grammys, and their hits include “In the End,” ”What I’ve Done” and “Numb.”

“We’re trying to remind ourselves that the demons who took you away from us were always part of the deal. After all, it was the way you sang about those demons that made everyone fall in love with you in the first place. You fearlessly put them on display, and in doing so, brought us together and taught us to be more human. You had the biggest heart, and managed to wear it on your sleeve,” the statement continued.

Linkin Park had planned to launch a tour this week, but canceled it following Bennington’s death. They released their debut album, “Hybrid Theory,” in 2000, and their most recent album, “One More Light,” dropped in May.

Billboard says the band’s latest effort, “One More Light,” re-entered Billboard’s Top 200 album charts at No. 17 on the most recent chart. The band’s popular debut, “Hybrid Theory,” checked in at No. 27. “One More Light” topped Amazon’s list of best-selling albums Monday, while “Hybrid Theory” was fifth.

“Our love for making and performing music is inextinguishable. While we don’t know what path our future may take, we know that each of our lives was made better by you,” the statement read. “Thank you for that gift. We love you, and miss you so much.”

The band signed off with, “Until we see you again.”