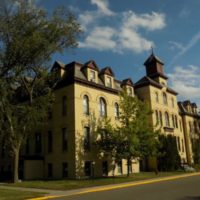 Little Falls, MN–According to a press release from the Preservation Alliance of Minnesota the Friends of Hurrle Hall dropped their lawsuit against the Franciscan Sisters of Little Falls after the Sisters stated, through their attorney and in a published statement in the Morrison County Record, that they have no immediate plans to demolish Hurrle Hall. The Friends group had filed suit in March of this year after several months of trying to persuade the Sisters to change their minds about razing the oldest building on the FSLF campus in the heart of Little Falls.

As reported in the Morrison County Record on Oct. 2, 2016 (link to article), the Sisters have now stated that they will not proceed with demolition until at least 2019.

The Friends of Hurrle Hall, Preservation Alliance of Minnesota, and the Heritage Preservation Department at the Minnesota Historical Society had tried to reason with the Sisters, pointing out the historical significance of the building and the opportunity for grant funds or tax credits to offset some of the costs of building rehabilitation and reuse. The Friends of Hurrle Hall filed suit only after those attempts at persuasion and compromise were soundly refused by the Sisters leadership, the building was completely vacated, and demolition seemed imminent.

In a Record article published April 3, 2016 (link to article), Sister Bea Eichten, community minister for the Franciscan Sisters of Little Falls, explained the Sister’s reasons for vacating the structure, stating “As for the future, we have been in the planning stages to take it down given the demands that a now-vacant 1891 building places on our charitable resources, Franciscan mission and canonical obligations.”

A statement issued by the Sisters and printed in the Record on September 25, 2016, outlined the Sisters’ current plans for the campus:

Our Franciscan congregation is engaged in the final stages of developing a long-term campus utilization plan. Our goal is to find a party which will assume ownership, development and operation of our campus in a manner that is consistent with our

Franciscan values of hospitality, simplicity, service to those who are poor, and care of the earth, while assuring that all of the 128 Sisters are cared for in our home in Little Falls.

Constructed in 1891 and the oldest extant building on the Franciscan Sisters of Little Falls campus, Hurrle Hall is a local historic landmark designated under the Little Falls Heritage Preservation Ordinance. Hurrle Hall also is eligible for listing in the National Register of Historic Places; it is likely that other structures—as well as the campus as a whole—also meet the criteria for historic designation. Listing in the National Register allows building owners/developers to utilize state and Federal Historic Rehabilitation Tax Credits, which offer a combined 40% income tax credit on qualified rehabilitation expenses. The Friends had urged the Sisters to keep Hurrle Hall standing so that the hoped-for development partner could utilize this important development incentive.

The Friends remain committed to saving Hurrle Hall and facilitating its successful rehabilitation. Together with the Preservation Alliance of Minnesota, which has served as an important partner in this advocacy effort, the Friends of Hurrle Hall will continue to promote the campus of the Franciscan Sisters of Little Falls as a historic asset within the community. Both organizations are working to attract developers to this unique opportunity for historic building reuse in Central Minnesota.

The lawsuit was dismissed without prejudice, meaning that the Friends of Hurrle Hall can take legal action in the future if any party again threatens Hurrle Hall with demolition.