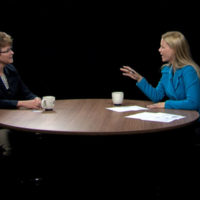 On this episode of Lakeland Currents we welcome Dr. Faith Hensrud, the new president of Bemidji State University and Northwest Technical College.  Dr. Hensrud came to Bemidji after spending more than 20 years at the University of Wisconsin-Superior, where she served as provost and vice chancellor for academic affairs. As provost, she served as the chief academic and operations officer, managing a $13 million budget and overseeing 130 faculty members, 12 academic departments, and three research centers.  In previous roles there, she served as associate vice chancellor for academic affairs and outreach, director of distance education and continuing education programs, and associate professor.  Dr. Hensrud is also a U.S. Army veteran, having served in active duty from 1986 to 1989 and as a member of the U.S. Army Reserve from 1989 to 2000. She retired with the rank of captain.  For this discussion, we will be focusing on her latest role: president of Bemidji State University and Northwest Technical College. She assumed the position on July 1 and will officially be inaugurated in October.