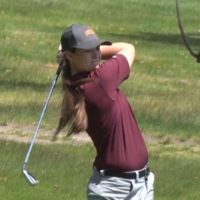 When the high school golf tournament tees off on Tuesday, there will be a familiar face there. Sydney Hufnagle of Lake of the Woods has qualified for the state tournament five times, thanks to hard work, dedication, and a knack for the game she loves.

“With other sports, you’re kind of playing against other teams, where with golf you can just play against yourself and the course,” says Hufnagle, a senior.

And in the battle of Hufnagle and the course, the course has had no chance. In 2015, she was one of just five 8th graders to make it to state, and she’s gone back ever since, doing so as the winner of the 8A tournament the last two years.

“It’s actually crazy and I can’t even really believe it myself, but I’m super stoked and happy to be there,” she says.

She was introduced to golf at age three by her grandpa, Ted Furbish, now the school’s golf coach, and she fell in love with the game instantly.

“Everyday I’d come home from work and she used to live behind me. She’d be over hitting balls in the yard and from there we just kept going with it and she just picked it up and went with it,” Furbish says.

He’s been with her every step of the way, joining her for each of her five trips to state, and helping her in ways a typical coach couldn’t.

“It’s super nice because I know him not just from the coach-side but personally, also,” says Hufnagle.

“Like I told her a couple of years ago, she’s probably golfed more with her grandfather than most kids will ever get to,” says Furbish.

One of her biggest strengths is her drive, often bombing it past her competition. But the key to her recent success has been the improvement of her mental game.

“As each year goes on, I slowly get better at my mental game and knowing that the next shot can always be better and just keep always improving,” says Hufnagle.

“It’s fun to watch it. When she’s firing on all cylinders, there’s not too many that will stay with her,” says Furbish.

With her high school career coming to a close, Hufnagle says what she’s enjoyed the most are the relationships that the game of golf promotes.

“Meeting a bunch of different kinds of people, helping people with their game, and just having fun,” she says.

Hufnagle’s top performance at the state tournament was last year, an 8th-place finish. She says her goal this year is to finish top-ten.

She will continue her golf career at the University of Wisconsin River Falls, with Furbish adding that he’ll have to make quite a few trips to see her play.