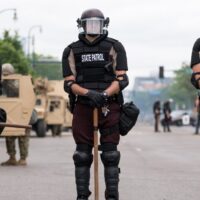 MINNEAPOLIS (AP) — The state of Minnesota has agreed to pay $825,000 and change several policies to settle a lawsuit brought by journalists who said they were hurt or harassed while covering protests over the police killings of George Floyd and Daunte Wright.

The American Civil Liberties Union of Minnesota and the state’s Department of Public Safety announced the settlement Tuesday. It prohibits the Minnesota State Patrol from attacking journalists, arresting or threatening to arrest them, ordering them to disperse, seizing their equipment and more.

It also calls for an independent review of all complaints alleging mistreatment of the media covering those protests, and issuing body-worn cameras to all troopers by June.

Several journalists reported being struck by less-lethal munitions, herded and detained while covering protests. After Wright, a 20-year-old Black man, was shot and killed by an officer in Brooklyn Center in April, the city’s police station was surrounded for several nights by protesters.

Tim Evans, a freelance photographer, described to The Associated Press how officers surrounded protesters after a 10 p.m. curfew passed, then charged into the crowd and began pepper-spraying and tackling people.

Evans said he was punched in the face, his credentials were torn off and an officer believed to be a Hennepin County sheriff’s deputy forced him to his stomach and knelt on his back.

Other journalists posted photos and videos online showing police detaining them while checking their credentials, and in at least one case spraying chemical irritants.

The ACLU said other portions of the settlement require that the State Patrol be trained on treatment of the media and First Amendment rights.

Litigation continues against other defendants, including the city of Minneapolis and Hennepin County.