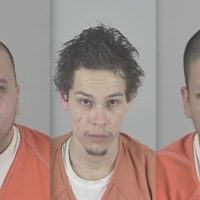 The Minnesota Department of Public Safety Bureau of Criminal Apprehension is investigating an officer involved shooting incident that happened late Thursday night following a home invasion and assault in the Community of Vineland in Mille Lacs County.

According to the preliminary investigation, at approximately 10:50 p.m. on Thursday, January 12, four men broke into the home at 17640 Ookweman Loop in Vineland with plans to carry out a robbery. Three of the men wore masks and one carried a sawed-off shotgun. There were more than a dozen people inside of the home at the time of the home invasion. The intruders assaulted several people and one intruder fired his weapon at least once. No one was injured by gunfire. Several people in the home fled into a back bedroom, barricaded the door and called 911.

As three deputies from the Mille Lacs County Sheriff’s Office arrived at the scene, two of the four intruders were exiting the home. Both were taken into custody. One of the deputies entered the home and located a third intruder in a bedroom with a shotgun pointed at several people. When the intruder refused to drop the shotgun, the deputy fired his weapon, fatally striking the man. The two other deputies entered the home and arrested the fourth intruder without incident.

One of the people injured during the home invasion was treated at the scene by EMTs from Mille Lacs Health System.

The Midwest Medical Examiner’s Office has identified the deceased as 20- year- old, Jamison Christopher Anderson of Vineland. An autopsy is underway.

The deputy who fired his weapon is Deputy Daniel Mott. He has been placed on standard administrative leave. Mott has been with the Mille Lacs County Sheriff’s Office for 14 years.

The three arrested suspects were booked into the Mille Lacs County Jail on assault, burglary and robbery charges.