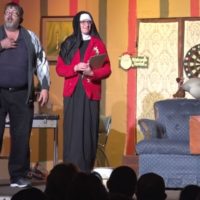 In Focus: Students, Staff Come Together Under The Limelight

The Kelliher Community Theater is an informal group full of familiar faces. Many of the cast and crew members are associated with the school district in some way or another.

The district’s superintendent leads staff, students, and other community members as Doc in Doc’s Holiday.

The community theater does not have a set schedule- simply putting on a show when they so choose. Calvin Mayers, who is the school custodian, had the idea to put on a performance and started asking around if anyone was interested.

Derek Nistler says he enjoys working with his co-workers.

For the students, it’s been interesting seeing the staff in a new light.

For one of the show’s stars, getting on stage in front of the students felt like second nature.

Dawn Jensen was in every single school play that they had during her four years.

Showing audience members that the passions they pick up now can continue in the future.

The show must go on at Kelliher’s Old School Center on Sunday at 7 P-M.