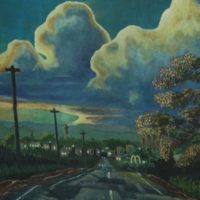 In Focus: John Simonis Artwork Goes From Bemidji To Statewide

Even if you don’t know who John Simonis is, if you’ve been to Bemidji area, you’ve probably seen his artwork hanging around town. John first moved to Bemidji with his family in 1976. He stayed in the area until his death in 2013.

“People would stop by and he’d show them what he’s working on and he’d talk about it and how many – sometimes even the details, the brushstrokes,” says Raymond.

John’s paintings have been featured in Bemidji bars, churches and even at the Bemidji airport. The places he’s been to have been a big inspiration for many of his paintings. John also spent 23 years in the Air Force, which also served as inspiration for his work.

Raymond says, while showing one of his father’s paintings, “This is one he dedicated to anyone who served in any of the Armed Forces, as you can see and then, you know, of course there’s a seven-star metaphor he would always point out.”

Now, John’s work has moved from Bemidji to places all over the world.

“This one was hanging in the nation’s capital, the Cannon Rotunda, it was selected to hang,” says Raymond.

Soon, the paintings that are left in Bemidji will head down south to be in a new gallery, started by Raymond. Those interested in the artwork can contact Raymond at s_ray_tyler@yahoo.com for prints.

“I’m in a transitional period, and it’s also going to be moving down to Hastings in the Metro area but it’s online,” says Raymond.

Soon, those interested in the artwork will be able to check out https://www.thejohnsimonisartgallery.com/ for more information. It is under construction at the time of this story, but should be back up by mid-October.