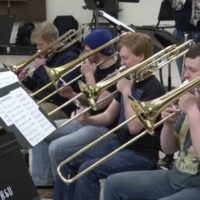 In Focus: Jazz Festival To Draw In Talent From Across The Region

Bemidji State is preparing for over 200 high school jazz band students to come to the campus for JazzFest. Eleven bands from across the region participate in the annual festival to learn from each other and even some guest artists. For this week’s In Focus, Lakeland News got a sneak peak at some of the pieces that BSU’s Blue Ice Jazz Band is preparing to perform.

Director Scott Guidry is hitting the ground running. After switching positions with professor Del Lyren, he’s only been the band director since the beginning of the month.

His predecessor has helped him pick out many of the pieces needed for their performances. Right now, the band is actively practicing about ten titles.

He also has many of the students to call on for guidance. The band has a very loyal group of students, some which have played in the ensemble for years.

While many are quite involved in other music department groups and the most difficult part might be finding the time to practice, it’s rewarding none the less.

Shelby Andrist says one of the highlights is being able to travel.

Another incredible opportunity is the chance to play with emerging artists such as Tia Fuller and Corey Christiansen for the festival.

But when it comes down to it, the best part is being able to practice your passion.

The annual JazzFest schedule is as follows:

Workshops will begin Feb. 2 with open rehearsal and performances with guest artists. High school jazz bands will be playing in the morning and afternoon.

Feb. 3’s schedule will feature a performance by guest clinicians Corey Chrisitansen and Tia Fuller as part of the Bemidji Concert Series, along with workshops in the morning and afternoon.

The festival’s final day on Feb. 4 will feature the last of the workshops along with a final performance featuring Bemidji State’s Blue Ice jazz band, joined by Christiansen and Fuller.

All of the festival’s daytime events are free and open to the public. The evening concerts begin at 7:30 p.m. and tickets will be sold at the door for $10. Students can purchase tickets for $5, and BSU and Northwest Technical College students are admitted free with a valid student ID. The Feb. 3 Bemidji Concert Series concert featuring Christiansen and Fuller will be held in the Beaux Arts Ballroom in BSU’s upper Hobson Memorial Union, while the Feb. 4 Blue Ice jazz band concert will be held in the Main Theatre of BSU’s Bangsberg Fine Arts Complex.

Both concerts are expected to sell out; persons interested in attending either of the evening performances are encouraged to purchase advance tickets at the BSU Department of Music.