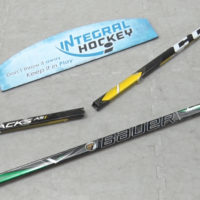 In Business: Integral Hockey Of Bemidji Brings Broken Sticks Back To Life

You may think that when a hockey stick breaks, it’s the end of the line, but thanks to “Integral Hockey,” a lot of sticks are being resurrected and kept in the game.

“It’s a patented process. We’ve been doing it now for almost 10 years. I’ve owned the franchise here in Northwest Minnesota now for about 4, and it’s a lifetime warranty on the repair,” says Tracy Pogue, owner of Integral Hockey Bemidji.

The 47-step repair process is top secret and was developed by a man for British Columbia, Canada. Almost no repair is too big or too small.

“We can fix the shaft. This happened to be a broken stick here. We can fix the blade. There’s just a couple of pieces of the stick when it’s broke right down in the little area right down here that we can’t, but everything else, it’s a hollow core, carbon fiber repair,” says Pogue.

Getting a stick repaired is really simple. All customers have to do is it drop it off at Top Shelf in Bemidji. The repair process will take up to ten days, depending on the workload. Then, customers pick it up and it’s ready to go. According to Pogue, a lot of costumers says they can’t even tell the difference between a new stick and an Integral Hockey repaired stick.

Pogue says, “When you’re looking at a hockey stick today that can cost upwards of $300, a stick is demanded to have some performance in it so when somebody is taking a look at an Integral Hockey repaired hockey stick, at first they’re a little bit leery like, ‘what am I going to give up?’ and really the repeat sales speak for themselves.”

Not only is the repaired stick saving the customer’s money, it’s also environmentally friendly, which is something Integral Hockey takes a lot of pride in.

“All of these stick prior to this repair system ended up in a landfill and they do not break down. This is a very green method and we’re very proud of that, so all of these sticks get reused again,” says Pogue.

Integral Hockey may have its Northern Minnesota base in Bemidji, but they do work all over the Lakeland News viewing area. The best way to learning more information is to head to their website here.

Pogue says, “The thing has just absolutely exploded in my market and when it’s 70% of new, that’s something to be said with the parents and saving some money, too.”