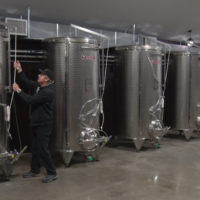 In 2017, the Dennis Drummond Wine Company opened their doors in Brainerd as a bistro and event venue but have been unable, due to Minnesota law, to produce their own wine. This January, after nearly two years in business, the Drummonds gained approval and will soon produce wine right here in the Brainerd Lakes area.

“My dad worked for CLC and he would have a map of all the wineries in Minnesota, and it’s almost like right here it was like this big empty space for wineries,” said Charles Drummond, chef at Dennis Drummond Wine Co.

Dennis Drummond and his wife Jody moved to Minnesota from California in 2005. Dennis has worked as a winemaker in California and has a Master’s Degree in Fermentation Science from the University of California Davis. Jody has over 30 years of experience in the hospitality, restaurant, and catering industry.

“She and I met out in California after we both moved out there. I used to live in Illinois after being raised in England. When we met out there, we eventually planned to move back here,” explained Dennis Drummond, owner and founder of Dennis Drummond Wine Co.

The Drummonds knew that the Brainerd Lakes Area is where they wanted to make their dreams a reality and open a winery.

“We always hoped and prayed that someday we’d have a winery, and we knew what it took to build the winery and where it should be and what country setting,” said Jody Drummond, Dennis Drummond Wine Co. owner.

In May of 2017, the Dennis Drummond Wine Company opened its doors with a bistro and event venue, though at the time due to Minnesota law, they were unable to produce their own wine. This month, that will change.

Later this March, the ingredients are set to arrive for the Drummonds to make their first batch of wine, a Chardonnay and a Cabernet. The Drummonds hope to have it ready in June.

“The truck is supposed to be here the 11th or 12th of March,” Jody Drummond said. “We’re very excited.”

For the Drummonds and their employees, the Dennis Drummond Wine Company is more than just a business.

“Jody and Dennis are amazing. All my coworkers are wonderful. Working here is more than just a job, we’re all family,” said employee Trishanda Pitheon.

Looking forward, the Drummonds are excited to produce their own wine on site and to share their passion with the Brainerd Lakes Area.

“We want to grow this as a destination area like all the breweries and all the other activities that people can do around here,” Dennis Drummond said.

“We just want to share our passion with Crow Wing County and the Brainerd Lakes Area,” Jody Drummond added.