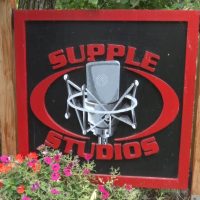 Troy Foss has always surrounded himself around music. After college, he lived in Los Angeles, where he worked in recording studios and in Chicago, where he did lots of freelance work.

Afterwards, Foss found himself back in his hometown of Bemidji, Minnesota, and his recording studio progressed from there.

“It literally started equipment in the back of my car and grew from there. And then it became a need in my house, in a booth, and then it eventually grew out of that and then we eventually built this building,” said Foss, owner of Supple Studios.

Supple Studios has been around since 2006, and the music recording studio was built in 2013. It’s a small space with a live room, a vocal booth and a control room. Foss says the facility was built specifically for recording and the rooms are designed for sound capture.

“We purposely designed it for acoustics and recording and listening back and mixing,” Foss said.

Foss has always had a drive for music. He says he enjoys capturing artists’ best performances in helping them transfer their vision into a final product.

“It’s really taking the stress of recording away from the artist and just letting them be who they are and capturing that moment, that’s what it’s really all about,” Foss said. “So, hopefully what I’m doing is not cumbersome or doesn’t come across as laboring to them. It’s just seamless.”

Over 100 artists have walked through the doors of the recording studio, and they don’t leave without taking a “mug shot” picture.

“When an artist comes, they pose with our iconic mug and they take a picture and we immortalize them on the wall,” Foss said.

Singer and songwriter Lance Benson has been recording in Supple Studios for years. He says the music recording studio has a comforting atmosphere.

“Every time we finish a project, I’m always just overjoyed with my expectations, and it’s always much greater than what I thought it could be,” Benson said.  “He [Foss] is always innovating himself with new technologies and always bettering himself as an engineer, and so there’s always growth between the projects every time we work together.”