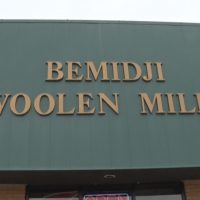 Bill Batchelder is the fourth generation of his family to run and operate the Bemidji Woolen Mills. It was started by his great grandfather in 1920 when he heard about a woolen mills operating in Holmes City, Minnesota. Batchelder’s great grandfather and grandfather went to check it out to see if it was something they’d want to bring to Bemidji.

“They took a train from Bemidji to St. Paul, St. Paul to Alexandria. Rode horses out to the site of the woolen mills, it took three days to go down, consummate the deal and come back to Bemidji. Where today you would drive down in the morning, visit all afternoon and come back in the evening. So, it takes – it kind of shows how the world has changed in 100 years,” Batchelder said.

The thought process behind it was that a lot of towns had enterprises likes creameries, green elevators and post offices. A woolen mill would fit seamlessly in the mix, especially since at the time there was a lot of sheep being raised in the area. Now nearly 100 years later, the business is still going on strong. Some products even produced locally in Bemidji.

“The original products are still very important today. So, one of them that we still manufacture is 100 percent wool quilts batting comforter for the top of your bed, covered in cheese cloth. They are made exactly the same way today that they were made in 1920,” Batchelder said.

They sell items from wool mittens and Pendleton Native American blankets to Red Wing work boots and Minnesota hand-harvested wild rice. The most iconic product bought is the red and black buffalo plaid jac shirt. The shirt comes in every size, from a size 2 to 52, to fit everybody.

The Bemidji Woolen Mills has made sweaters for the governor of Minnesota in 1974, Billy Crystal from Disney’s Monsters University, a coat for Nelson Mandela in 1998, and in 2012 when Rick Santorum was running for president.

“Three months later, Rick Santorum flies into Bemidji. Spends the whole day here for Super Bowl Sunday, and he orders 6,000 sweater vests to be sent to all of his donors all over the United States and that made Time Magazine – it was crazy how that had taken off,” Batchelder said.