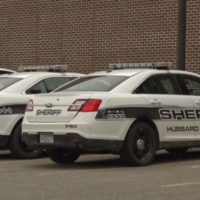 A Hubbard County deputy sheriff was forced to shoot one dog with his taser and another one with his gun after being attacked trying to serve two court-ordered restraining orders.

On April 10, a Hubbard County deputy sheriff went to a residence southeast of Park Rapids in Hubbard Township in an attempt to serve two court-ordered restraining orders. When the deputy exited his squad car, two dogs left the house and approached him aggressively.

After the first dog tried biting him, the deputy sheriff used his taser, immobilizing the dog and causing the dog to stop its attack. The second dog tried attacking the deputy as he tried to get back into his vehicle. The deputy tried using his taser to stop the attack, but the dog bit the taser and pulled it from the deputy’s hand. The dog continued attacking the officer and bit his hand causing a severe wound. The deputy drew his gun and was forced to shoot the animal to stop the attack.

The homeowners came out of the residence after the attack. After a brief discussion with the homeowners, the deputy left the scene and went to St. Joseph’s Hospital in Park Rapids to receive treatment for a hand wound. The dog was euthanized by an area vet due to its injuries.