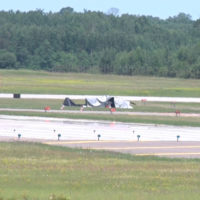 A North Memorial Health helicopter crashed and impacted on its bottom around 1:00 AM on Friday morning. A nurse, identified as 58-year-old Deb Schott of Biscay, and a pilot were found dead at the scene, and a flight paramedic remains hospitalized.

The reason for impact is still being investigated as the Federal Aviation Administration has been at the scene of the crash all day today, and the National Transportation Safety Board will be performing their investigation tonight.

“A lot of the questions on the how, and the why, and how did this happen will all be answered after those investigations are complete,” said Brainerd Lakes Regional Airport Director Steve Wright.

Fog in the area reduced visibility to about a quarter of a mile according to the National Weather Service in Duluth.

“We did confirm with weather reports it was foggy at the time, so visibility was very minimal; as you can see at the runway environment it’s out in the open, so it’s very dark, still within the weather minimums of our normal instrument approaches, so really nothing out of the norm,” said Wright.

The debris of the crash was in a location that allowed the airport to continue day-to-day operations.

“Right now it remains on the field and the airport remains operational, so we do have both of our runways open right now at this time, so aircraft can still come and go,” said Wright.

Wright was sympathetic to the families involved and knows that this will impact the people of the Brainerd Airport as well. “We’re family, so when these types of situations happen and I haven’t had them happen at all since we’ve been here, it really hits home.”

Lakeland News will continue to follow this story and update our viewers as the details behind the deadly crash and investigation reports are released.