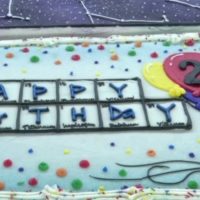 The Headwaters Science Center in Bemidji opened its door to the public for the first time 25 years ago.

Annie Butler Ricks, the Executive Director at Headwaters Science Center, said, “We’ve been open to the public for 25 years and we think that that deserves a party, so we are celebrating.”

The Headwaters Science Center was founded by Laddie and Jim Elwell on March 6, 1994 and has since become the only science center in the Bemidji area.

“The center is really unique in that not very many towns or no other town the size of Bemidji has a science center,” said Butler Ricks.

The science center has a lot of exhibits that focus on various science principles such as math, engineering and physics. Kids are able to learn more about science in a fun, interactive and informal way.

“Everything we do is really science-based and today, it is pretty easy for a lot of people to discredit science,” said Butler Ricks. “But coming in here and doing some math puzzle problems for adults or playing with some big blue blocks, doing something that reminds us that everything that kids do is science, exploring the world around them.”

Butler Ricks said the Headwaters Science Center is grateful for the support and that they plan on being around for the next 25 years.