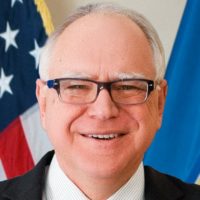 Governor Tim Walz announced today his appointment by President Joe Biden to serve as a co-chair on the Council of Governors along with Ohio Governor Mike DeWine.

The Council, which consists of 10 bipartisan governors, is responsible for advising the Secretary of Defense, Secretary of Homeland Security, and the White House Homeland Security Council on matters related to the National Guard and civil support missions. Governor Tim Walz served nearly 25 years in the Army National Guard. Achieving the rank of Command Sergeant Major, he was the highest-ranking enlisted service member ever to serve in Congress.

“I am honored to be appointed as co-chair to lead this bipartisan group of governors to continue to strengthen the state-federal partnership on matters related to the National Guard and civil support missions,” said Governor Walz. “This has been an historic year. In addition to their federal mission, the National Guard was critical in responding to civil unrest and helping our nation fight COVID-19. I look forward to continuing to work with other governors and our federal partners to support the National Guard and advise on matters related to homeland defense and civil support.”

The bipartisan Council of Governors serves as the lead forum to strengthen partnerships between the Federal government and State governments to better protect our nation from threats to our homeland security and all types of hazards. The Council focuses on matters of homeland security; homeland defense; civil support; synchronization and integration of state and Federal military activities in the United States; and other matters of mutual interest, including those involving the National Guard. Federal-state cooperation is critical to protecting communities given the evolving challenges and threats facing our country, which range from extreme weather to domestic and international terrorism to a global pandemic. The Council of Governors will closely coordinate with the Biden-Harris Administration to bolster preparedness, resilience, and response on behalf of all Americans in times of need.

The Council members include: