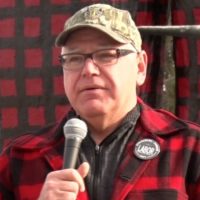 Minnesota Governor Tim Walz put himself into quarantine on Monday after a member of his security detail tested positive for COVID-19. Meanwhile, US Senator Amy Klobuchar says her husband has been hospitalized with the virus. And those announcements followed an Instagram post by Lt. Governor Peggy Flanagan late Sunday that said her brother died of the disease in Tennessee.

Minnesota’s number of confirmed cases shot up to 235 as of Monday, a jump of 66 new infections. One person has died, but no new deaths were reported. Health officials say the number of Minnesotans with the virus is likely much higher.

Gov. Walz will self-quarantine for 14 days. His office said in a statement that he learned of the potential exposure early Monday morning and has not left his home since. He was in proximity to the individual late last week.

These rapid developments came as the Governor considers whether to order Minnesota residents to shelter in place. A spokesman said Walz did not plan to issue a shelter order Monday but that discussions were ongoing within the administration.

For most people, COVID-19 causes only mild or moderate symptoms such as fever and cough. But for some, especially older adults and people with existing health problems, it can cause more severe illness, including pneumonia. The vast majority of people recover within weeks.