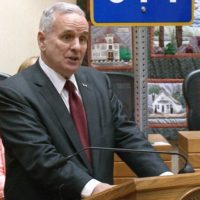 ST. PAUL, Minn. (AP) — Minnesota Gov. Mark Dayton announced Tuesday that he has prostate cancer, revealing the diagnosis hours after collapsing while delivering his State of the State address the night before.

The 69-year-old Democratic governor said he plans to finish the final two years of his term, during which he faces a unified GOP front after Republicans took control of the Senate and strengthened their House majority in November.

Asked whether he still felt up to the job, Dayton said: “I think I am. If I don’t, I won’t continue.”

He also said he doesn’t believe the recent cancer diagnosis and his fainting were linked. Tests on what caused Dayton to collapse were scheduled for Tuesday afternoon at the Mayo Clinic in Rochester. He will return to Mayo next week to determine treatment for the prostate cancer.

“I take it very seriously. I have an obligation to all of the people of Minnesota,” he said.

Dayton, who turns 70 on Thursday, has had other health issues since taking office in 2011. A series of back and hip surgeries have left him with a limp, though he said Tuesday he’s no longer in pain. He was briefly hospitalized last year after fainting at a campaign event, later blaming the episode on overheating and dehydration.

Dayton was about 40 minutes into his annual address Monday night when he began stumbling over his words and trailed off, shaking after taking a sip of water and crumbling behind the lectern, where he struck his head. Several state officials rushed to his side to catch him, and medical professionals serving in the Legislature gave aid.

He appeared conscious as he was helped to a back room and later walked out of the Capitol on his own to return home, where a top staffer said he was given routine tests by emergency medical technicians.

Dayton returned to work Tuesday to unveil his proposal for a $45.8 billion budget. He told reporters that he felt fine Monday until about a minute before losing consciousness.

“It was a very brief episode,” he said.

Dayton said he was diagnosed with prostate cancer Friday after a biopsy and had planned to reveal it after his consultation next week. He said doctors believe the cancer hasn’t spread past his prostate, suggesting it was caught early, and that it would likely be treated with either surgery or radiation. His father, who died in late 2015, underwent successful prostate cancer surgery and lived 25 more years.

Prostate cancer is the most common cancer in men after skin cancer, and the third-leading cause of cancer deaths in men behind lung and colon/rectal cancer. According to the National Cancer Institute, prostate cancer usually grows slowly, most men with it are older than 65, and most won’t die of the disease.

Dr. Peter Sershon, a urologist with Metro Urology in St. Paul and director of the Prostate Cancer Center at United Hospital who is not involved in Dayton’s care, said options could range from close monitoring to drug treatment to surgery. None of those are likely to affect Dayton’s ability to govern over the long run, he said.

Dayton frequently joked Tuesday as he was asked about his health, saying he was still fit to continue as governor because “as far as I know, there are no brain cells in my prostate” and noting his collapse Monday evening generated good will with Republicans.

“If I had known it would result in Republicans not criticizing my speech, I might have tried it years ago,” he cracked.

Dayton was rounding into a proposal to offer a state-run public health care option for all Minnesota residents when he fainted during his State of the State address. On Tuesday, he released a more detailed proposal for a $45.8 billion budget — a nearly 10 percent increase from the state’s current budget — that includes extra funding for a new preschool program and boosting overall public school spending.

The state has posted several years of surpluses, and the governor has pointed to that financial stability as a hallmark of his six years in office, insisting he’ll safeguard against a return to painful budget shortfalls.

One Injured in Snowmobile Accident South of Motley