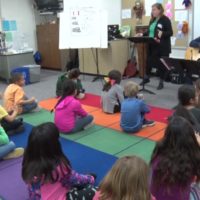 How are songs made? Where does music come from? All the questions a kid can think of about melodies and harmonies are being answered thanks to Classical Minnesota Public Radio’s Class Notes program.

“Two years ago, we put together a program for Minnesota Public Radio’s Class Notes program where we bring new music by Minnesota composers into elementary schools and perform them and talk about the pieces and talk about what composers do with the students,” says Alyssa Anderson from The Dream Songs Project.

The Dream Songs Project has been traveling to different schools all over the Lakeland viewing area with MPR. The program works with both middle and elementary schools students. Older kids usually focus on writing and composing, while things get a little more active for the younger kids.

Joe Spoelstra from The Dream Songs Project says, “I love when I can pop up and I see the kids that are so engaged and it might be that it’s just, that the connection is just that they haven’t been so up close next to somebody performing. Or, for sure they’ve not been exposed to music quite like this.”

Class Notes gives students access to the musicians, and at the end, they even get to ask all the questions they want.

Spoelstra says, “I think the big takeaway that we want to get the students to think about is, where does the music even come from? That there are people involved in the process of making music.”

On some occasions, those questions spark an interest that some students may not have been aware of before.

Anderson says, “There was a little girl yesterday who told us after the program that she writes her own songs, and Joe said, ‘Well that means you’re a composer,’ and it was like a light bulb goes off. She says ‘yeah!’”