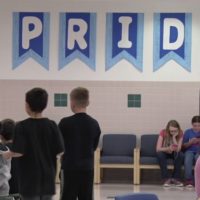 Kelliher School is holding their monthly prize drawing. When a janitor, bus driver, cook, or teacher notices a good behavior, they write it down on a slip that goes into the bin. If their slip is picked, the student gets to pick a prize.

This is a part of Mustang PRIDE, which is the school’s version of PBIS – Positive Behavioral Intervention and Supports. It’s an all-encompassing culture from a PRIDE song produced by art teacher Eric Carlson to a ping pong ball challenge that students also get for good behavior.

If they reach their ping pong ball goal, classes or the entire school can win something like a party. Eric Carlson uses them to reward students for going above and beyond during the lessons.

Carly Amsden helped put together the model with the help of a team about seven years ago. She says there’s a more positive atmosphere since they implemented the system. Something Carlson agrees with.

The school’s principal says that under the program, the school has seen an increase in attendance and a decrease in disciplinary referrals.