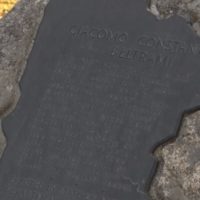 Giacomo Beltrami is described as a jack-of-all-trades. He was a legal scholar, a judge and a journalist. Today on August 22nd, we celebrate the legacy he left behind in Northern Minnesota.

“The monument you see behind me was erected by the state conservation department, today known as the Department of Natural Resources, and they set this up here near to the spot where Giacomo Beltrami, the famous explorer, stood on his quest to find the source of the Mississippi River,” says Gary Rozman, the executive director of the Beltrami County Historical Society.

Dozens came out to the celebration held at the Turtle Lake Town Hall. The crowd toasted to Beltrami with red Italian wine and then were treated to a special preview of a new documentary being made on Beltrami’s life.

“Norwood Hall is actually a local documentarian and filmmaker; along with his colleague Janet Rith-Najarian, they are creating a documentary film about the exploration of the headwaters and Giacomo Beltrami. So that will be an excellent way, once that’s produced, to learn more about this great man,” says Rozman.

Today’s event didn’t just celebrate the monument’s 70th birthday. It was also the first of several events leading up to the bicentennial anniversary of Beltrami’s expedition to find the source of the Mississippi.

Rozman says, “The monument itself actually celebrated 125 years since Beltrami traveled through this area – which means, if my math is right, in five years in 2023, we’ll be celebrating the 200th anniversary of Beltrami’s travels through northern Minnesota.”

Leading up to the bicentennial celebration in 2023, Beltrami County has decided to take on a unique expedition of it own. At today’s event, Bemidji Mayor Rita Albrecht read a proclamation to start efforts in making Filottrano, the city Beltrami called home, a sister city to Bemidji. Nothing is official yet, but with participation from the public, it’s possible.

Rozman says, “We are hopeful that the private citizens of Beltrami County, the students, business people, our tourist department, all take it upon themselves to engage in the program of cross-cultural interaction and exchange.”

People hoping to send well wishes to the people of Filottrano can drop off notes at the Beltrami County History Society in Bemidji. Rozman will be taking the notes and other Beltrami County artifacts to Italy in September.