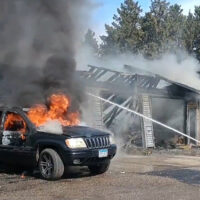 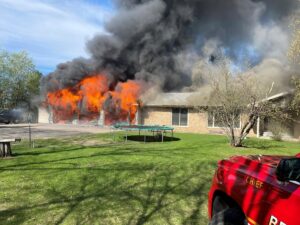 A woman and three children were able to safely exit a Bemidji area house this morning after the attached garage of the home caught on fire.

The Bemidji Fire Department and the Beltrami County Sheriff’s Office along with medical personnel responded to the fire Tuesday morning at 4005 Cardinal Rd NW.

Around 9:37 AM, an off duty/on call firefighter from Solway had been driving along Highway 2 when he spotted a cloud of heavy black smoke and called 911. Initial reports indicated that there was a garage engulfed in fire that quickly escalated into a fully involved garage fire attached to a house.

When the Bemidji Fire Department arrived, firefighters found a three-stall garage that attached to a single story residential house on fire. The garage portion had been fully engulfed in heavy black smoke that started to extend up into the attic of the home.

A total of 27 firefighters and thirteen pieces of equipment responded to the scene. Bemidji Fire Chief Justin Sherwood said that their initial thought was it could get water on the fire quickly so they could salvage the living quarters of the home.

It took firefighters about 90 minutes to bring the fire under control, but they remained on the scene for about five hours.

Sherwood reported that four vehicles were destroyed in the fire. Three of the vehicles were inside the three-car garage stall and the other was sitting outside of the garage. Fire officials say the house and its contents suffered extensive damage.

One firefighter a suffered a minor injury and was treated on scene.

Sherwood would like to emphasize the importance of using fire detectors or any early fire detection device installed inside homes.